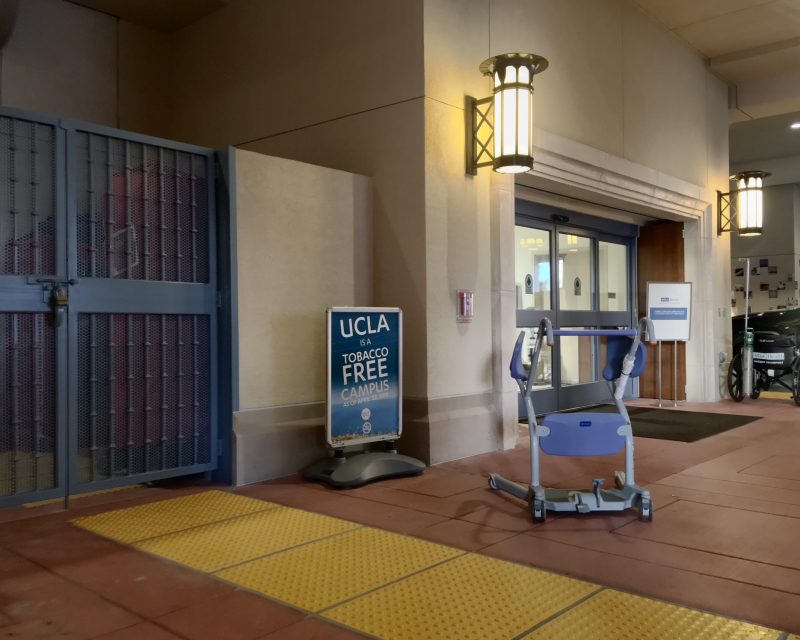 It was an early quiet Saturday evening in July. I was people watching sitting on a wooden memorial bench in a warm concrete hospital emergency room parking garage in Los Angeles.  Only one police car sat on the street outside, a couple uneventful ambulance arrivals came and went. The hard yellow bench was pleasant outside, away from the crowded waiting room, hateful, ubiquitous television blaring whatever opinionized news or sports drivel de jure, and the night crew waxing the stone floor with big blue machines throbbing along beside the ill and injured people draped and sprawled across rows of wood and blue vinyl chairs. 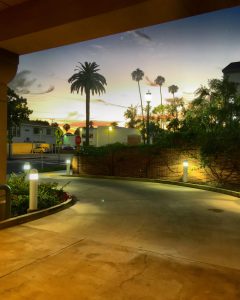 Outside sitting next to the concerned Malaysian looking man with his wife and daughter I just sat and watched he goings on, like the sixty-seventy-something gray and brown homeless man coming and going in his black foot propelled hospital wheelchair. He kept step-rolling in and out the entrance to the ER, leaning forward to stop the doors with his hand when his feet crossed the threshold to the accompaniment of squeaking tires on slick concrete and swishing swishing of aluminum and glass doors.

Upon one return from behind me by the garage exit, where he has gone off to eat something they gave him in a corner behind the thick water pipes and valves, the rolling man said clearly, “you’ve been here a long time.”

“Yes,” I replied, standing in front of my now empty perch, stretching my legs. “It takes hours, and hours to get through an emergency room.” 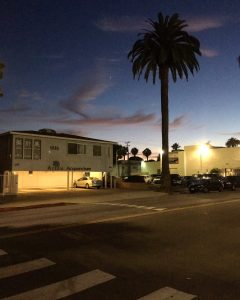 Black is the color and many is the number of cars in LA. Amongst the Mercedes, Hondas, Ram SUVs, BMWs, Porsche Cayennes, and Toyotas came a hulking black Ford Excursion with all the rear windows behind the passenger doors blacked out. The gleaming machine had nothing on it except the small outline of a fierce bull tossing its head over the right rear taillight. Not even license plate frames. The quiet behemoth squeaked into a parking space next to a pillar with the driver’s side tires a foot over the left line, looming over a tiny, equally spotless bright orange Fiat 500.

Two tiny, 4-foot something women climbed down deliberately from opposite sides the SUV, and each carefully and systematically closed the doors above their heads. They looked South American and were self-assured, poised, and focused in knee length black skirts and white shirts with midnight black hair pulled back in ponytails. They appeared a mother and daughter as they sheparded a small boy who looked upset and ill towards the ER portal. He squawked once and then fell silent next to his mother in front with his grandmother following about six paces behind, all focused confidently on the entrance. I imagined Argentinians from a wealthy gated neighborhood maintaining careful situation awareness and poise in their safe and formidable vehicle outside the compound, kind of a Latin American Mad Max expedition.

A woman with a dirty arm sling drifted up and asked me if I, “had any tobacco products,” and then said she needed some change for something or other her car. “No,” was all I bothered to say.

At one point a middle-aged man with two twenty-something sons emerged ranting about, “this fucking hospital!” One son went for the car and the other stayed behind the wheelchair until it pulled up. They got in and left. The empty wheelchair sat facing the garage with the white blood pressure cuff on the pavement between the foot rests. A few minutes later the fat door guard in a tight uniform came out and asked the two women on the bench beside mine playing a loud telenova on a cell phone if they saw the person in the empty wheelchair. They said he had left, and the guard went back inside.

Around 11 the floor guys started on the floor just inside the doors. They brought out all their machines and equipment and scattered them around both side of the sliding doors amongst the wheel chairs. 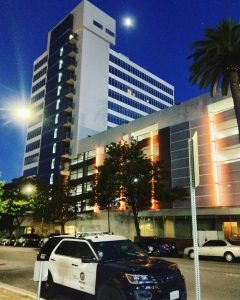 A little after midnight a male and female cop came out and walked by headed out of the garage to their SUV that had been parked all shift on the street outside.

About 12:30 I wandered over and talked to one of the floor waxers who was slowing down now. They were not waxing the floors as I thought. They were sealing the marble chips-in-concrete terrazzo floors. The sealer was wearing because of construction dust and too much traffic. The job would only take a day this time. When the floors went in it took twenty days to polish and seal the first time. They were trained and employed by the hospital because the floor contractors wanted $50,000 to do the waiting room floor and the hospital hired their own permanent employees to control costs.

A scruffy kid in a hoodie shambled by and asked for a cigarette. Again, “no.” It must have been the big sign in front of the fenced disaster supply yard bragging about how long the hospital had been a smoke free zone since sometime 2000 or other that attracted the tobacco people.

We left at about 1:45 AM after the ER had gotten the person we came for stabilized and into a room. The black-on-black South American urban assault vehicle was gone. So was the Fiat. The blue and gray floor equipment layed quietly beside the doors and the white blood pressure cuff was still on the ground next to the drive up. A man in a white uniform was writing up the cars that were left in the twenty-minute parking drop off spaces. He hustled off an old white Ford pickup with a driver in it. A few had been there all night.

It is easier to drive the Los Angeles freeways at two AM—a little anyway.