Fear And Loathing At Starbucks 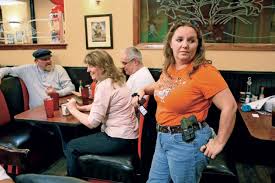 Are you scared yet? Well, you should be!

While contemplating the Void with coffee, the Internet it’s known in these parts. Three locals were talking.

First was: “…they checked to see if they were witches by taking them out to the pond and holding them under. If they drowned they were not a witch. If they didn’t they took them and hung them. Hahahahaha all around…”

One is really afraid: afraid that ISIS really is coming to kill everybody, afraid that the Mexicans are coming to take jobs, afraid that his kids have jobs in Europe where it is unsafe. Most afraid of all that somebody said, “we live in a borderless world.” That’s the root, the core, the nub of the fear—the old world of the treehouse out of control, the barbarians at the gates and the gates unlocked. Somehow, someway somebody in the Middle East is going to come here, look up his address, show up at his door and rape the family dog. You know it, I know it, we all know it.

Don’t judge, don’t be smug. We all have those fears in the dark when the night pries open the vault and lets out the demons to cavort. Those night terrors cackling about personal mortality, money, children, work, other people trammel hope and reason with abandon, sometimes until the very gray light tiptoes in around the edges of the drapes and the shape comes back into amorphous black terrors across the room: just a dresser, just a TV. Whew! The day drags away the fear and we can go about life again, unafraid again, negotiating with existence for one more day, knowing in the heart of darkness that only a few nights are like that last one. Then we screw up a day, and comes the next dark night, or several.

Some entertain the demons of the dark far too long, inviting them each day into the light. They skitter along behind them in the daylight gleefully whispering jib jabber in their ears. Fear at their shoulder licking their ear. They do honestly believe that Islam is coming to decapitate them, rape their women, and enslave their children. They are those peasants in the old Magnificent Seven movie who so desperately don’t want to offend the outlaws. “If only they would not take so much from us every summer. Please just leave some and we will not tell anybody. Maybe we should build a wall?”

They cannot see that walls never stopped the Mongols in China, or the proto-Scots in Roman England, or the Wehrmacht at the Maginot Line. The famous one in Berlin, it did what now? No, they have their bags of hard earned grain, their little tract of dry dirt, and their whispering demons telling them that only a wall will protect them—“stay in line, keep your head down, build the wall.”

Fear will not protect their world, protect their economy, preserve their peace. When the real fight comes they cave, they become the Vichy French, the peasants who do not want to offend the bandits, the Loyalists in the end if the fight gets hard. It isn’t really cowardice, they are just people driven by fear, unable to get past it.

We are the farmers we were 20,000 years ago dreading the marauders from the steppe and afraid to trust the Seven. We are all really stuck in the 180th Century BCE, or a movie—one of those. I always liked the James Coburn character with the switchblade…

People are funny creatures. Starbucks is a funny place like that.