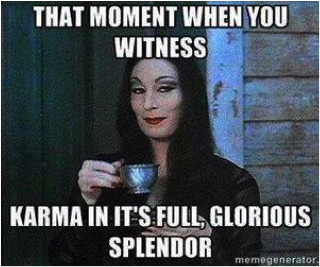 You know the prayer. The sutra. The one about justice and other people. There must be one.

Here are two for your consideration in a time of only two tribes. One is for the occupation, about the one percent, or the ones who want to be one percent. The other is a tale of immigration and America and following the rules therein.

They spring up behind gas stations. A couple of guys get a high pressure water pump, hook up a hose to it, and cut the station in on a Saturday or Sunday afternoon when the weather is warm and the shoppers are out.

Three or four youngish Vietnamese men were snagging cars behind the Shell station that 1997 Sunday in Sunnyvale, CA. Cars pulled up next to the pump and they swarmed over them to make them twinkle in the springtime sun. It did not involve high school cheer squads with the kids laughing, waving signs, and flirting with each other while shouting at passing cars: “your car is dirty!” These guys were just trying to make a buck.

I turned in and parked next to the Mercedes Benz with the “Los Altos Health Club” sticker that was getting wiped down. The young red-blond man watched them intently. He had on kaki chinos and a tucked in polo shirt, and sported that thick, healthy build that comes from health clubs and midwestern ethos.

Los Altos is one of those older Silicon Valley developments on the western hills just below the Santa Cruz Mountains. It hails from the 1960s when the ranch style homes were already getting expensive, uphill from the quick and cheap post war versions of a decade before. It is a reserved, as in proper community where the owners bought the homes new and drink a lot while they are waiting to get old and cash out, so they can move to Auburn above Sacramento to retire on California Real Estate wealth. The downtown had French restaurants, chiropractors, Real Estate offices, and still tried to keep both small town, now suburb feet nostalgically planted in mid century last – and the upscale health club.

The healthy young man peered across the thick German paint on the trunk, gesticulating circles with his downward facing palm and bellowing that the washers had scratched swirls in it. They were quiet and attentive and he was acting. He stood behind the car and in front of the shopping cart.

He glared fiercely at me getting into the car, slammed the door, and stomped on it because I was standing watching him with my arms folded waiting to have my car washed.

He jumped out waving his arms and screeching about how they should have told him the cart was there, etc., etc., etc.

“Hey buddy, just take off and quit trying to beat them out of the wash!” I said loudly to him with a nasty look.

He glared some more and zoomed off shouting that he would get the police to close them down.

The car washers were doing everything they could to not burst out laughing and they gave me huge grins.

Do you ever watch those tennis matches on TV where all the heads turn like a great rippling beast watching the little ball fly this way and then back that way again?

The line at the Sunnyvale, CA post office in late December wrapped behind the windows in esses of unsmiling impatience holding packages to be mailed at lunchtime.

The old woman with iron gray hair, a long coat, and a big black purse swooped in at the end of the line of windows and started talking loudly in heavily Italian accented English to the postal clerk before the next person in line could get to the window. She wanted stamps. No, she could not understand the clerk, who by now was almost shouting at her to wait in line. She just needed stamps and did not understand. The angry clerk finally gave her the stamps.

The poor old woman from the old country put the stamps in her pocket and left. While she was pretending to make herself misunderstood an important looking letter fell out of her bag. Many chins wagged down, and many pairs of eyes watched the letter flutter to the floor. Then wagged back up.

Each time another person came up to the clerk or walked down the row of windows they carefully stepped over the letter and went about their business. Game, set, match.

When I walked out of the post office the old woman was talking loudly in Italian to a young man leaning out of the window of a pickup truck parked by the front. I looked at her and went back to work.

Karma, what happens to others when justice isn’t so blind after all. Usually seen best when those it is served upon come from the other side, another part of the tapestry of society, another tribe. Is it still karma then? Only the Buddha knows for sure…