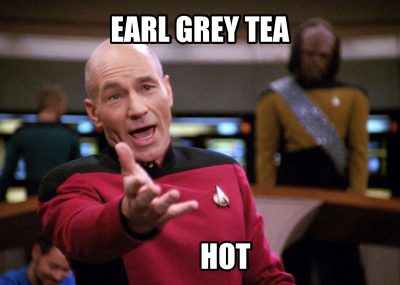 In the sustainable, alternative, clean and green renewable energy universe order and common sense prevail. In this reality “the entrepreneurial spirit,” “the innate genus of America’s engineers and scientists,” and most of all “innovation” will lift all boats creating new energy systems to replace the fossil fuels and dirty, unsafe nuclear energy plants.

The Star Trek warp engines are what’s really needed. In the Star Trek Federation matter and anti-matter mix together in the warp core to produce faster than light travel along with all the air, food, gravity, heat, cooling, light, and Earl Grey tea necessary to make it so. It’s wonderful entertainment and most everybody loves it, unless they are Star Wars believers.

Some believe the wonders of the starship enterprise are only a hundred years away and the UN is developing the Prime Directive as we speak. This complicates the development of new energy systems and fuel economies, since magic is expected and many politicians promise magic to keep getting elected.

By way of example consider the Star Trek food replicators. The ship’s sustenance is made on little shelves in the walls all over the ship.

A little calculating goes like this: If a Big Mac weighs 216 grams (a little more than ½ lb) according to nutritionfacts.com, we can use Einstein’s energy to matter converter, E=MC2, to calculate the energy it takes to make a Big Mac.

How much energy is that? Well, if it takes about 3 seconds to make my Big Mac in the Star Trek food machine the power required would be:

The largest nuclear bomb developed by the United States in terms of explosive yield was probably the B41. The yield was probably near 25 megatons. (“Probably” because in the world of classified nuclear weapons nothing is every completely described, and nuclear weapons are not precise machines like carburetors.) You can see the casing of one of the B41s at the National Atomic Museum in Albuquerque, New Mexico if you are ever there.

Syracuse University publishes the rough energy of a 100-megaton nuclear bomb as 1017 Joules on an online conversion site. So in this stellar culinary example, it takes the energy of the largest hydrogen bomb the US has ever built to make a Big Mac, fries, and a Diet Coke in a Star Trek food machine. No wonder all those actors on Star Trek are so skinny!

Now think about Lt. Commander Scott’s engines. If the imaginary Enterprise weighs as much as the now retired aircraft carrier version, 85,600 tons for CVN65, we can calculate what it would take to back it out of the solar garage. The impulse engines in TV and movies appear to be used for normal parking lot maneuvers around star/planet systems. If say the captain wants a quick jaunt to Jupiter, he or she can use the impulse engines for that too. They seem to work pretty well and accelerate the starship smartly in these instances. If we back out the TV Enterprise and accelerate it to ½ the speed of light in 10 seconds for a jaunt to Jupiter, it will take 4.4X1024 watts to get there according to this calculation:

(The entire solar power output of the sun is 1027 watts according to the Syracuse University power table.)

It seems we have used 1/1000 of the output of the sun, the whole sun, and nothing but the sun to back the starship Enterprise out of the garage and fly one way to Jupiter–and we have not even had lunch yet! When that first shift comes off duty and starts in on the big Macs, oh, boy! Now you know why star fleet rules say “NO SUPERSIZE!”

What is the point of a silly little analysis of a made up space ship? Sadly, many people think that science is like Star Trek and if it isn’t then the scientists and engineers are not trying hard enough. Belief in myth and magic makes reality seem dull and unrealistic expectations are placed on scientific solutions to problems like power generation and distribution. The thing is when you look at the reality of solving things like energy availability problems in the real world, it’s immensely exciting and interesting. Much more so than imaginary Star Trek is.

Think about how plants take a little water, a little sunshine, and a few nutrients to make food animals and people eat to give them the energy run their bodies and do all they do and dream of doing. That is the real magic. Maybe engineers and scientists are so socially obtuse sometimes because they are having so much fun trying to figure out cool things like photosynthesis and if animals dream. No, don’t you dare say it! They are not just studying dirt and sunlight in order to make Big Macs out of it!