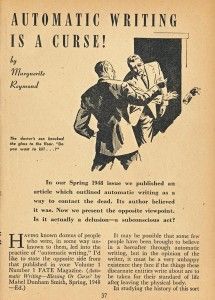 The primary Rule Number 1 must always be adhered to, it’s the rule about never telling your reader anything when you can show them. If you don’t ever break this rule you will be a good writer.

Here are some examples:

When Unk got to the man at the stake, Unk hesitated for just a second—because the red-haired man at the stake looked so unhappy. Then there was a tiny warning pain in Unk’s head, like the first deep nip of a dentist’s drill…

A Thing About Machines, Rod Serling

About a year later, the caretaker of the cemetery where Mr. Finchely was interred, a taciturn, grimm man, did tell an odd story to his wife one night at the dinner table. He had been using a power mower on the cemetery lawn, and two or three times it had shown a disconcerting tendency to veer off to the right and smash against Bartlett Finchley’s tombstone…

The House, The Spider And The Child, Ray Bradbury

And hearing his name, the newcomer in the basket gave a glad cry.

Then there is the rule to always use the verb “said” when writing dialog—and don’t tell either, while you are said-ing. And don’t start sentences with conjunctions.

The train rounded a long curve. The Nile ancestor leaned and creaked.

“You’re tired,” the ancient one rasped…

“I would have missed it the first time,” Yossarian replied softly, his face lowered.

There voices echoed slightly in the long, narrow bungalow.

“I would have missed it the first time,” Yosarrian repeated…

Don’t use adverbs, especially when using dialog. Don’t use too many dialog tags.

Yes all of that. Do it all and be a good writer.